What Does Listening to Your Pet With a Stethoscope Tell Us?

The humble stethoscope is synonymous with medical care. It's literally the first medical tool we get as doctors, and it's a part of our identity. But what do we actually learn when we listen to your pet with a stethoscope? To find out, let's start by figuring out how a stethoscope works.

How a Stethoscope Works

A stethoscope works by simply amplifying the sounds of whatever it's pressed against. It's a really old-school medical instrument: It's literally just a hollow tube with one end enlarged to amplify sound (the end against your pet) and the other end narrowed to allow us to hear the sound (the end we poke in our ears).

Firstly, it's important to understand that sound is simply waves of air. These waves of air push on our ear drums, causing them to wiggle and, through a series of complicated maneuvers in our middle and inner ears, gets turned into nerve impulses which our brain interprets as sound.
The stethoscope turns the wiggles caused by the movement of your pet's heart and lungs into sounds, which it amplifies and conducts to our ears. 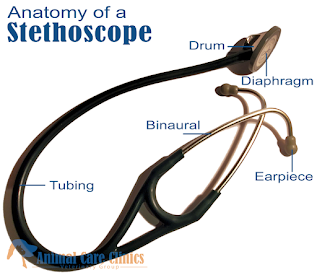 As I mentioned, a stethoscope is real old-school tech: It works just like it did a hundred years ago. At it's heart (pardon the pun :), it's made up of a drum (which is covered by a diaphragm in modern designs that helps amplify the sound more). The diaphragm is the part that we press against your pet. Sounds coming from inside your pet (such as their heart beat) causes their chest wall to wiggle slightly. That wiggle then wiggles the diaphragm. The small wiggling of the diaphragm causes the air in the drum to wiggle (creating sound waves).
The drum is the hollow area inside the stethoscope behind the diaphragm. The size of the diaphragm and the hollow structure of the drum cause the sound to be amplified by increasing the size of the wiggles, concentrating the sound (due to some physics we'll gloss right over...) and then funneling it straight to our ears.
To get the sound to our ears, there is flexible tubing connected to the drum. The tubing directs the sound from the drum, through the binaural - rigid metal tubes and the other end of the tubing that are bent to perfectly poke into our ears - and out the earpieces - the rubber tips at the end of the binaural that block outside sound and ensure the binaural doesn't jab a hole in our ear drums. Finally the sound enters our ears where we hear ... well what?

What Do We Hear?

The heartbeat. Yes. But that's not the whole story. A stethoscope primarily lets us hear heart and lung sounds (there are a few other things we can listen for, but they are not the primary role of the stethoscope).

The stethoscope lets us evaluate the rate, rhythm and quality of the heart sounds.

Heart rate is simply the speed at which the heart is beating. It's typically measured in beats per minute (BPM). Normal heart rates are:
Caveat: These are very approximate resting heart rates. Heart rates vary wildly with stress, exercise, breed, "squirrel!", etc., etc.

Rhythm is how regular the heart rate is. We are listening to see if the heart beats are evenly spaced apart, or if there are irregular spaces between them (which can happen with some heart diseases).

The quality of the heart sounds is very important. We want to hear a crisp "lub" followed immediately by a "dub". So "lub-dub ... lub-dub ... lub-dub ... lub-dub". We hear heart murmurs as "fuzziness" in the sounds of the beat, such as "lub-shhh-dub" or "lub-dushhh".
Heart murmurs: Heart murmurs are the sound of blood back-flowing through a heart valve (typically; as always, there are some exceptions). The heart pumps with a lot of pressure and uses valves to ensure that blood only moves one way. When the valves in the heart don't seal tightly, some blood can get forced backwards through them. This can sometimes be innocent (normal - such as some heart murmurs heard in puppies), but they are often an early sign of heart disease.
Aside: In recording my dog's heart for the accompanying YouTube video, I discovered he had a new heart murmur! He's now had a cardiac ultrasound (called an echo) and has been diagnosed with early heart disease. If this isn't a great example of why annual wellness exams are important for your pet (where we evaluate your pet's heart using our trusty stethoscope), I don't know what is!

Lung sounds are the other major thing the stethoscope helps us evaluate. With lung sounds, we are listening to hear that the airways in the lungs are unrestricted and clear.

When airways become restricted, such as with asthma, we can often hear a "wheezing" sound as the air is forced through the narrowed air passages. Wheezes alert us to issues with restricted (often inflamed) airways.

We can also hear crackling and other "wet" sounds when there is fluid in the lungs (as there can be with pneumonia or other diseases). As well, sometimes we don't hear any lung sounds. This can alert us to either an area of lung that is simply too unhealthy for air to enter (called a "consolidation"), or that something abnormal is surrounding the lungs, blocking the sound*.
* Except sometimes in cats this is normal ... Cats never quite follow the rules. As any cat owner well knows...

There are some other sounds we can hear with our stethoscopes as well:

Sometimes we'll listen to the abdomen to determine if the gastrointestinal tract sounds normal. And sometimes an intestine can sneak into the chest and we hear it when listening to the the heart and lungs. This is usually not a good thing and it's definitely unexpected. When this happens, we know we need to look a little closer ...

I love the sound of cats purring. And it sounds amazing through a stethoscope, however, it also drowns out all other sounds. It's not too common to have cat purring at the clinic (and we love it when they do!) but every now and then we get a sweet kitty who's just too happy to let us hear anything else. We've developed a bunch of tricks over the years to gently stop a cat purring (such as running a tap, letting them sniff rubbing alcohol, trying to reason with them ...) which usually work. But not always 😺

The stethoscope isn't picky: Whereas the earpieces do help keep out external noise, the stethoscope will amplify all sound that reaches it. If there's a lot of external noise or people talking loudly, we often hear that, making it difficult to evaluate the sounds we're listening for.
Aside: Sometimes when we're listening with our stethoscope and a client speaks to us, we can't hear them because of the earpieces in our ears. Just so you know, we're not being rude, we just can't hear you with our ears plugged!

The stethoscope is in some ways a very simple instrument, with a lot of limitations (there are many heart and lung conditions we simply cannot hear), however it is an amazing tool for performing a quick, easy and non-invasive evaluation of your pet's heart and lungs. There's a reason the humble stethoscope has become the tool that identifies medical professionals - they work - and we love them!

See How a Stethoscope Works

To see our video on how a stethoscope works, head over to our YouTube channel (and don't forget to subscribe!).
What Does Listening to Your Pet With a Stethoscope Tell Us YouTube Video
With Care, Dr. Hans Christoffersen
Owner, Animal Care Clinics
cat dog heart lungs murmur pet stethoscope veterinary

Popular posts from this blog

Why Rabies Vaccination is a Whole Other ... Animal

I just read about a pet cat in BC that was euthanized after it was found playing with a bat.  The bat was caught, euthanized and sent for testing. It came back positive for rabies. The cat was not up-to-date on rabies vaccinations and the owners could not afford to board the cat for the 90 day quarantine that was required*. That only left government-mandated euthanasia - the government has no flexibility with these rules.  This is really sad - they had kids which makes this suck that much more - and illustrates one of the reasons why I encourage vaccination, including rabies vaccination. I won’t get into the over-vaccination debate here, as rabies vaccination is a whole other ... well ... animal. * This can be expensive: $40-$50 per day is not uncommon, so quarantine could have cost the owner $4,000 or more What Is Rabies? Rabies is a virus that is passed in the saliva of infected animals and enters the blood of its victim via any route it can (e.g. through a bite wound or mucous membr
Read more

A quick post today: The SpaceX Starlink hardware arrived at Animal Care Clinic, so I'll unbox it with you here. Exciting ... ! The Package The packaging is simple and very .. well ... SpaceX. It's a grey monolithic box with just the SpaceX and Starlink logos and an outline of the satellite receiver dish. The package measures about 82x66x23 cm (32x26x9 in) and weighs a little over 13kg (30lbs). And yes - it really did ship from SpaceX in Hawthorne California! Unboxing! Enough preamble - let's get to it! There is surprisingly little in the box. On top are the "detailed" instructions (you'll get the joke in a sec), and then the 4 (really - only 4) components, and the wiring that connects the components. Instructions These are the largest, simplest instructions I have ever seen. They are the size of the box (almost 3'x2'!) and yet contain only 3 steps in only pictures (like Ikea, but without the little people ... and confusion). Starlink Instructions 1) Go
Read more